John is a firearms journalist who's work can be found on AmmoLand, Truth About Guns, Bearing Arms, The Federalist Papers, Reason Magazine, The New American, Soldier of Fortune, and many others.

He has been a guest on Coalition Radio, Lock and Loaded, Trench Work Chronicles, Gun Funny Podcast, The Hank Strange Show, Guns & Gadgets, and many more shows. He has been cited as a source in the majority of firearms news videos on YouTube

He has interviewed members of the Oakridge Boys, Misfits, and any other musical acts. He has also interviewed actors, politicians, and others.

He is one of the best known investigative journalist in the 2A space.  He has broken stories by developing contacts within the ATF and other government agencies.  He has also taken the industry.  If there is a story out there John will find it. 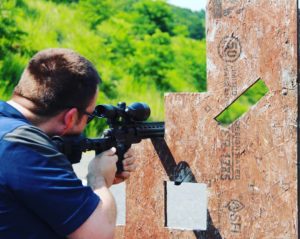 John is also an Amazon Best selling author.  His book "Speaking With Giants" sold over 2ooo copies and was number 1 in the Shooting catagory for four weeks.

John has several books in the works with the next being released in the fall of 2021  It will be available in all major retailers.

John lives in Northern Virginia with his wife and two sons.